Powerlifting Belts: The Ultimate Guide With All The Answers 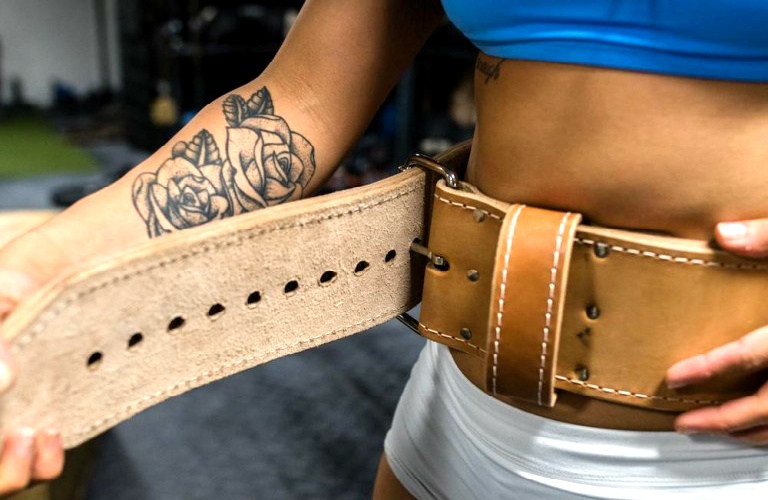 Powerlifting belts are an essential piece of equipment that enhance training and are absolutely essential on meet day. They come in various styles and sizes but all serve to satisfy the same purpose: allow powerlifters to increase the amount of intra-abdominal pressure they are able to generate while lifting.

Essentially, a powerlifting belt behaves as a rigid structure that produces a normal force vector towards your torso as air and pressure is exerted outward against it. In other words, as you push against the belt—it pushes back against you. And the stiffer and more rigid the belt, the less force is lost to compression and other variables.

When worn properly a belt can add a significant amount to your one repetition max (1RM) by allowing you to maintain a rigid, upright, and safe spinal position during squats and deadlifts. Beyond that, however, they are a powerful training tool when you consider the principle of compounding interest.

While performing some amount of your exercises without a belt is likely a good idea, using one for a majority of your training translates to large gains over a long enough period of time. When you use a belt, you are able to do one of three things (or a combination of two or more):

In other words, you perform better, lift better, and make larger physiological adaptations that lead to new muscle and increased strength.

Over weeks, months, and years this small training advantage begins to add up to significant differences. As an extreme example consider training an entire year without a belt vs. choosing to use one. With each workout you would be able to lift almost as much as you could with a belt. However, consider that a powerlifting program if ran properly will include 100+ squat and deadlift days over the course of a year. That is over one hundred workouts that could have been slightly better (and safer).

Don’t think that adds up? You might be in for a rough awakening on meet day.

What Goes Into Choosing the Best Powerlifting Belt?

There are three variables that come into play when choosing the best powerlifting belt:

The first is an easy one: leather is the way to go. Velcro and other synthetic materials are all but worthless and do not provide even a hint of the same support and stiffness that leather delivers. With that said, all forms of leather are not equal. When you make the investment to buy a quality belt, it will last a lifetime.

On that note, belts come in varying thicknesses and sizes (width). Currently, the IPF and affiliates such as the USAPL allow belts of up to 10cm in width (roughly 4in) and 13mm in thickness. Knowing this, if you plan to compete it is smart to get a belt that maximizes these regulations. If you do not compete in the above, check with your federation to make sure there will be no issues.

The width is most often seen in two sizes:

While the larger option will provide more support, it has its drawbacks when it comes to deadlifts as you will learn below.

Which is better? It depends.

Without a doubt, the 13mm thickness provides a distinct advantage in support and stiffness which translates directly to a more rigid core for efficient force production and transfer through the torso. For squatting, it is considered the best option.

When it comes to the deadlift things aren’t as black and white. While the thicker belt does provide more support, it is also larger and can get in the way during deadlifts. Every single inch of positioning makes an incredible difference in the biomechanical leverages of a deadlift—and a thick belt can throw off your ideal positioning just slightly. Not everyone will experience this negative, though.

It is mostly an issue with sumo deadlifts; conventional deadlifts are generally unaffected.

The absolute best option is to have both—even if you find that using a 10mm belt on deadlifts is unnecessary, it becomes an extremely powerful training tool. By using the thinner belt during your competition prep, you become accustom to the lessened support—but still make sure to hit all of your sets, repetitions, and weights.

Then, on the last week just before your competition switch to the thicker belt. You will receive an extreme confidence boost as you watch your opening numbers fly up with the added support. You are essentially saving your “power up” (the thicker 13mm belt) until you need it—meet week and the actual competition.

Thickness, size, and material are accompanied by two more variables: type and style.

When it comes to type there are 3 general options:

The lever belt, on the other hand, is a different animal. Instead of a prong that fits into any number of pre-drilled holes, the lever belt is set in place at your current belt size. This makes it quick and easy to put on and take off the belt—simply by lifting or lowering the lever.

Both types have their pros and cons. The single prong belt is a classic—it will last an entire lifetime and gets the job done every single time. There is no maintenance. There is no adjusting of the lever as you gain or lose weight. You simply put it on and get to work.

On the flip side, the lever belt is an absolute luxury. The ability to put on your belt and take it off quickly after an intense set makes switching back to a prong belt seem like self-induced punishment. With this convenience comes a price, however. Lever belts are notorious for breaking and you may need to order replacement parts in the future. They also require tools to adjust, making sharing your belt with your lifting partner a huge pain. It’s also just one more item to get lost in your gym bag. Lastly, it is difficult to adjust the belt mid-workout if you prefer wearing it differently for bench, squats, or deadlifts.

To be frank, everyone needs a prong belt. A lever belt is something that should come later as an awesome addition to your existing gym bag.

The style of the belt is again where things get a little hazier. All powerlifting belts are the same thickness and width throughout the entire length of the material. Tapered belts typically used for olympic weightlifting, on the other hand, are not. This tapered style is used by some powerlifters during deadlifts as the smaller strip of material can be placed along the lower back to allow for increased mobility. This improved mobility lends itself to better, stronger starting position with the end result of more weight lifted.

How to Wear a Powerlifting Weight Belt

How to actually use the belt properly deserves mention as many, many people get it wrong. The belt is not intended to be worn as tight as possible. Many people slap on the belt as tight as they can stand and go through their lift. This is ineffective and possibly dangerous depending on the lift.

Instead, the belt should be worn snug but not constrictingly-tight. The belt is used for one purpose: to help you build more intra-abdominal pressure. As you put it on, you should have enough room to breathe deeply into your stomach. As you gather a deep breath, you use that air to push against the belt—while also squeezing your rib cage down. This creates a “locked in” position. In the process, your core becomes very rigid.

When putting on the belt, you can place it low or high on your torso depending on personal preference and what lift is being performed. For most lifters, wearing the belt low is best on squats. Deadlifts begin to muddy the water though, with some powerlifters preferring to wear the belt high on the abs. It is definitely something worth experimenting with next time you do pulls.

Some lifters also like to wear the belt backwards for deadlifts—though you will need the help of a training partner to pull it off.