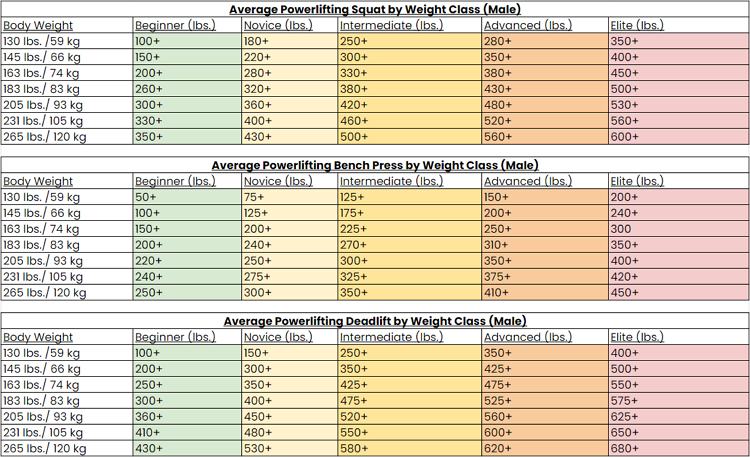 When it comes to powerlifting, weight classes average lifts allow other powerlifters to see how much others in their weight class are lifting, and can be used as an estimation on which weight class they should compete in.

This data, alongside the powerlifting weight class trick of figuring out what your true lean body mass is by getting a DEXA scan (originally done for bone density, but also one of the most accurate ways to determine lean body mass) done, will allow lifters to be fully “maxed” based on their muscle mass.

Or in other words, the information below can be used to how much others are lifting and the scan can help determine how lean you can get which will allow you to project and strive for the weight class you’re most competitive in.

An Overview of Powerlifting Strength Standards and Weight Classes

These federations provide a platform that helps individuals analyze and measure the strength levels for different compound exercises which are the deadlift, squat, bench press as well as the overall powerlifting aggregate or total when measured against other lifters who have similar body weight.

This comparison is independent of the body mass index (BMI) of these persons—this is an assessment of a person’s body fat content that is based on the height and weight and applicable to both sexes.1

Powerlifting strength standards can however provide a guide post and indication on how much should you be able to lift for your weight.

In powerlifting, weight classes average lifts and associates strength standards reflect the one-rep max lifts (1RM)—which is the most widely used standard for measuring muscle strength and represents the maximum weight that can be lifted in one rep.2

Raw powerlifting standards are defined as lifters having little to no gear or equipment and are indicated:

They include (elite, master, class I, class II, class III, class IV) which is a standard nomenclature that the RAW Powerlifting Federation uses and some use (world class, elite, master, advanced, intermediate, novice, untrained).

Depending on the body, some standards may classify liters based on the amount of time they have been lifting rather than the amount they can lift.

Powerlifting strength standards and weight classes are outlined below:

The numbers denoting the weights and range that each class lifts based on weight is derived using the 68–95–99.7 rule which is also referred to as the empirical rule. In the powerlifting competition, 99.7% of all the weight 1RM will occur in the standard deviations from the average 1RM of all the lifters. 68% (majority) of the lifters’ 1RM will be in the first deviation from the mean as shown above, and 95% in the second and 99.7% in the third.

In other words, the majority of the lifters will fall in the largest weight deviation from the mean, and in the extremes of the data set—beginners making a smaller percentage and the elite lifters capable of heavier weights making a small number as well.

When it comes to raw male powerlifting, weight classes average lifts is foundational knowledge to figure out which weight class you should compete in. of knowing the right class and establish optimal powerlifting goals.

When considering the DEXA scan results, knowing the lean mass would be key to pinpointing someone’s true weight class and of course, it may be beneficial to lose weight in the interim to get to that true weight.4

Powerlifting weight classes average lifts contained in the tables below are broken down by the body weight that corresponds with the class. The lifts are all raw with little gear used to reflect the stipulations aforementioned.

The data derived from the section below is garnered from the data set of percentages of weights lifted to give a range for where each class will fall, in respect to weight—with the majority falling in the middle and a few on the extremes.

Of course, these are powerlifting standards so figuring out how many people can bench 225 for the standard population vs powerlifters isn’t nearly the same since the the strength standards for the two demographics are vastly different.

The table below has data compiled for the male squat for each powerlifting class. Both body weight and lift weight are in pounds and these have been rounded out.

This table provides data for each body weight and the corresponding class that remains the standard for male deadlifts. It should be noted and observed that squat numbers are usually 90% of the squat numbers, this is known as the deadlift to squat ratio.

The table below is a compilation of the data that displays the standard lift weight for the different classes. Again, these are also categorized by body weight and apply to only powerlifting competitors or those abiding by powerlifting criteria when training.

It should be noted and from observation, powerlifting weight classes average lifts for each of the three individual lifts do not add up for the powerlifting totals. The powerlifting total is essentially an all-round consideration of the lifter pointing out weak points and strengths that a lifter may have.

When a lifter concentrates on one kind of lift, say the deadlift then there will be an improvement in that lift since they are not dividing their energy among all the lifts. A lifter may be an advanced lifter in the deadlifts but end up an elite in the powerlifting totals because they may be a better, more balanced, all rounded lifter.

Woman’s average lifts in powerlifting also have a standard spread across the three compound exercises and as can be expected their number will be lower than males—however, just like the males, they too have the same classes of lifts: beginner, novice, intermediate and so on.

Powerlifting has seen the inclusion of women in greater numbers than before and as a result data has been gathered and assessed on what their lifting averages are in the 3 compound movements. Their weight range is between 104 lbs. to 185 lbs.

Again, just like the males, powerlifting weight classes women standards and rules dictate having little to no gear, equipment and other assistance to ensure that numbers reflect raw strength without the assistance gear such as squat or deadlift suits.

Squat Averages for Females in Each Powerlifting Weight Class

This table gives the powerlifting weight classes average lifts for raw squats in women in regards to their respective classes. To maintain raw lifts in the squats, approved knee sleeves may be used as part of the powerlifting gear.

Knee sleeves provide compression around the knees and thereby support them during the squat and reduce any pain or manage and manage any osteoarthritis that may be present.5

The female powerlifting weight classes average lifts for deadlifts are higher than any other lift in the powerlifting category with averages being spread over the same classes.

Bench Press Averages for Females in Each Powerlifting Weight Class

Bench press averages for females reflect the lowest numbers since the bench press is an upper body focused workout. Females should pick their ideal weight class by ensuring they have low fat content to thus know their mass and therefore know what their average bench is.

The table below details the averages for bench press across the weight classes.

Similarly to the males, females also have powerlifting weight classes average lifts that reflect their powerlifting totals inclusive of all 3 compound movements. The averages here also do not add up from each individual lift.

Their numbers are lower than in men but do provide an excellent guide for women who are venturing into powerlifting programs or wanting to compete.

For someone looking to compete in powerlifting or simply passionate about powerlifting, use these numbers as a rough estimate to gauge your goals.

Because when you compete in powerlifting, weight class average lifts can be used to gauge which weight class to be in and the trick of using a DEXA scan can help anyone figure out just how lean they can get in order to compete in the weight class they’ll be most competitive in.